Engels in Eastbourne
CMNH and CAPPE Conference – originally to be held to mark Engels@200 – at University of Brighton, Eastbourne campus – now forthcoming when Covid permits – for more details see here

The original Call for Papers:
28 November 2020 marks the bicentenary of the birth of Friedrich Engels, the German radical philosopher who in works such as The Condition of the Working Class in England (1844), The Peasant War in Germany (1850), The Housing Question (1872), ‘The Part Played by Labour in the Transition from Ape to Man’ (1876), Anti-Dühring (1877), Socialism: Utopian and Scientific (1880), Dialectics of Nature (1883) and The Origin of the Family, Private Property and the State (1884) made pathbreaking and profound contributions to modern social and political theory. As the co-thinker of Karl Marx and co-author of The Communist Manifesto and ‘The German Ideology’, he played a critical role in the forging and development of classical Marxism specifically. But like Marx, Engels was ‘above all a revolutionary’, who also played a role in revolutionary upheavals such as the German Revolution of 1848 and in the international socialist movement.
When Engels died in London on 5 August 1895, at the age of 74, his last wish was that following his cremation his ashes be scattered off Beachy Head, near Eastbourne. Marx and Engels had visited many Victorian seaside resorts, such as Margate, Ramsgate and the Isle of Wight, but Eastbourne was Engels’s favourite place and where he holidayed for extended periods during the summers in later life. Engels wrote to Sorge on 18 March 1893 for example that he had spent two weeks in Eastbourne and ‘had splendid weather’, coming back ‘very refreshed’.
As part of the wider commemorations planned for Engels@200, Engels in Eastbourne welcomes proposals for papers on any aspect of Engels’s life, work and intellectual and political legacy. Themes may then include but are not restricted to the following:
– Engels’s relationship to Marx and Marxism
– Engels’s anti-colonialism and internationalism
– Engels’s understanding of the origins of women’s oppression
– Engels’s analysis of natural science and the natural world
– Engels’s understanding of religion
– Engels’s analysis of capitalism and working class and peasant struggles
– Engels’s concept of ‘social murder’
– Engels’s role in revolutionary movements and relationship to other revolutionaries
– Representations and commemorations of Engels

Our keynote speakers:
Tariq Ali is a writer and filmmaker. He has written more than two dozen books on world history and politics, and seven novels (translated into over a dozen languages) as well as scripts for the stage and screen. He is an editor of New Left Review.
Terrell Carver is Professor of Political Theory at the University of Bristol. He has degrees from Columbia University and the University of Oxford, and has held visiting appointments in the USA, Australia, Japan and China. He has published widely on Marx, Engels and Marxism, including Friedrich Engels: His Life and Thought (being re-issued for a 30th anniversary edition) and his current project is a short book Engels Before Marx coming out in late 2020 as a ‘Palgrave Pivot’.

Conference supported by the Centre for Applied Philosophy, Politics and Ethics and the Centre for Memory, Narrative and Histories at the University of Brighton 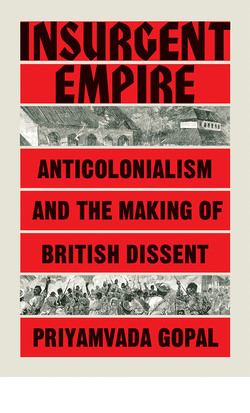 For those of you near Cambridge on Thursday 6 June 2019, this book launch might be of interest:

Join Dr Priyamvada Gopal at Heffers bookshop as she talks about her new book, Insurgent Empire: Anticolonialism and the Making of British Dissent, in conversation with Dr Christian Hogsbjerg. It is a book that reframes the narrative, focussing on how resistance in the colonies changed British ideas of freedom.

Much has been written on how colonial subjects took up British and European ideas and turned them against empire when making claims to freedom and self-determination. The possibility of reverse influence has been largely overlooked. Insurgent Empire shows how Britain’s enslaved and colonial subjects were not merely victims of empire and subsequent beneficiaries of its crises of conscience but also agents whose resistance both contributed to their own liberation and shaped British ideas about freedom and who could be free. This book examines dissent over the question of empire in Britain and shows how it was influenced by rebellions and resistance in the colonies from the West Indies and East Africa to Egypt and India. It also shows how a pivotal role in fomenting dissent was played by anticolonial campaigners based in London, at the heart of the empire.

For more information on Priya’s new book please see here – I am delighted to be joining Priya to help launch it in Cambridge on 6 June.

National unity demonstration against fascism and racism in London #N17

After the horrific recent attack by ‘alt-right’ racists and fascists in London on Bookmarks bookshop – a longstanding socialist bookshop ‘founded in 1967 in a suitcase’ according to Ian Birchall, I thought the least I could do would be to just briefly put up a post in solidarity with Bookmarks. As someone who is proud to have had two books published with the help of Bookmarks bookshop in the past – Chris Braithwaite: Mariner, Renegade and Castaway (2014) and (as co-editor), Celebrating C.L.R. James in Hackney, London (2015) – indeed we had the booklaunch for the little booklet on Chris Braithwaite in Bookmarks bookshop itself – I managed to pay them a visit today (and bought a few books, and a nice anti-fascist greeting card – see photos below).

Fascist attacks on left wing (and black, women’s and LGBT+) bookshops are of course nothing new, and as Bookmarks manager Dave Gilchrist rightly noted in the Guardian, obviously have chilling historical echoes of ‘book-burning’ in 1930s Nazi Germany. In the current climate when fascists internationally are more emboldened and confident than ever thanks to the normalisation of racism by the likes of Trump and his myrmidons, we urgently need to come together to build a united mass movement against the far right that can turn the tide against them. I would also urge anyone reading this who has not already done so to visit Bookmarks either in person or through their website online and buy a book out of solidarity.

The last 2 years has seen the biggest growth of racism since the 1930s – it’s time to turn back the tide…
Saturday 17 March – #MarchAgainstRacism in London – http://bit.ly/antiracismday18
#TrumpNotWelcome • #BlackLivesMatter • #RefugeesWelcome • No to #Islamophobia & #AntiSemitism • #NeverAgain

Two new exhibitions out now in time for Black History Month 2017 feature the life and work of Chris Braithwaite – in Liverpool and in London.

In Liverpool, at Merseyside Maritime Museum there is an exhibition based largely on the work of Ray Costello, Black Salt: Britain’s Black Sailors and ‘reveals the contribution Black seafarers have made to some of the most significant maritime events of the past 500 years’, and runs until September 2018.

In London, Tower Hamlets Local History Library and Archives are hosting a new exhibition of artwork on the life and work of Chris Braithwaite by London-based artist Basil Olton, also of Barbadian heritage, who ‘has created a number of new artworks in ceramics reflecting their shared concerns of imperialism and its impact on contemporary British society. The artwork includes clay sculptures as well as archives documenting Chris Braithwaite’s surveillance by the state which have been manipulated by the artist’, and runs until January 2018.  See the full programme of events here: http://www.ideastore.co.uk/local-history-necessary-fiction

Mayor of Tower Hamlets, John Biggs, said:
“Chris Braithwaite was an inspiring and revolutionary black socialist, trade unionist and political activist. The campaigning work that he carried out in the East End in between the wars had a profound effect on the working lives of dockers and seamen in the East End and beyond. So, it is fitting that this exhibition brings to life the work that he did and shines a light on a sometimes overlooked, but very important figure in our local history.”

RMT General Secretary, Mick Cash, said:
“We’re proud to be associated with this important memorial for a genuine working class hero, especially in our time of political instability. Chris Braithwaite’s legacy of political and industrial activism in the face of overt racism and prejudice should be on the national curriculum and both Tower Hamlets Council and Basil Olton are to be congratulated on their work to bring this memorial and exhibition about. When we look at the practice of nationality based pay discrimination in today’s shipping industry, all unions who organise seafarers and dockers have lessons to learn from Chris Braithwaite’s example of steadfast and effective campaigning to end long established employment practices that exploit and discriminate against workers to increase owners’ profits.”

2017 marks the centenary of the Russian Revolution, and among the many conferences and events being organised to mark the anniversary I am co-organising one entitled ‘The Red and the Black – The Russian Revolution and the Black Atlantic’ which will be held at the Institute for Black Atlantic Research (IBAR), University of Central Lancashire, Preston, from the 13-15 October 2017 – for more information please see here, which has details of how to register and a provisional programme to download. Keynote speakers are Professor Winston James (University of California, Irvine), Dr Cathy Bergin (University of Brighton), and Professor Hakim Adi (University of Chichester), while there will also be special performances from Linton Kwesi Johnson, Tayo Aluko and David Rovics.

Remembering the Leeds Convention of 1917

To mark the centenary of the historic Leeds Convention of 3 June 1917, where some 3,500 democrats and socialists pledged solidarity with the Russian Revolution and voted to set up Worker’s and Soldiers’ Councils in Britain, Leeds Trades Council and the Ford-Maguire Society with the generous support of the Lipman-Miliband Trust are holding a one day event at the Swarthmore Centre in Leeds on Saturday 3 June from 10-4pm. Speakers include Michael Meadowcroft on the Leeds Convention, John Newsinger on the Russian Revolution, Janet Douglas on Arthur Ransome, Leeds and the Russian Revolution, and Jill Liddington on ‘Leeds Suffrage Stories: Isabella Ford, Mary Gawthorpe and Leonora Cohen’. There will also be an evening event with American folk singer David Rovics performing  – for those near Leeds this is not an event to be missed. Together with Janet Douglas I have recently co-edited a new centenary edition of the proceedings of the Leeds Convention, British Labour and the Russian Revolution – The Leeds Convention of 1917 (Spokeman, 2017) which includes the original 1974 introduction to this volume by the late Ken Coates as well as new archival material and other details relating to this event which Ralph Miliband described as ‘perhaps the most remarkable gathering of the period’.

11.30 – John Newsinger, ‘Revolutionary Russia and the Dream of a New World’

3pm – Final Remarks (inc Steve Davison, Keighley TUC) and Book Launch of ‘British Labour and the Russian Revolution – The Leeds Convention of 1917’ (Spokesman, 2017) and David Rovics leading us in singing ‘The Red Flag’ . 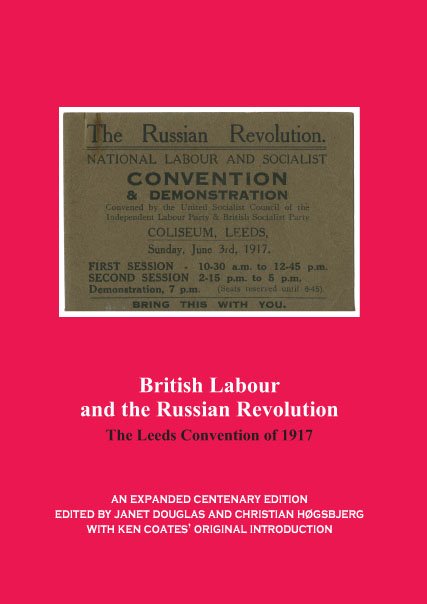