Out now as part of the C.L.R. James Archives series with Duke University Press… 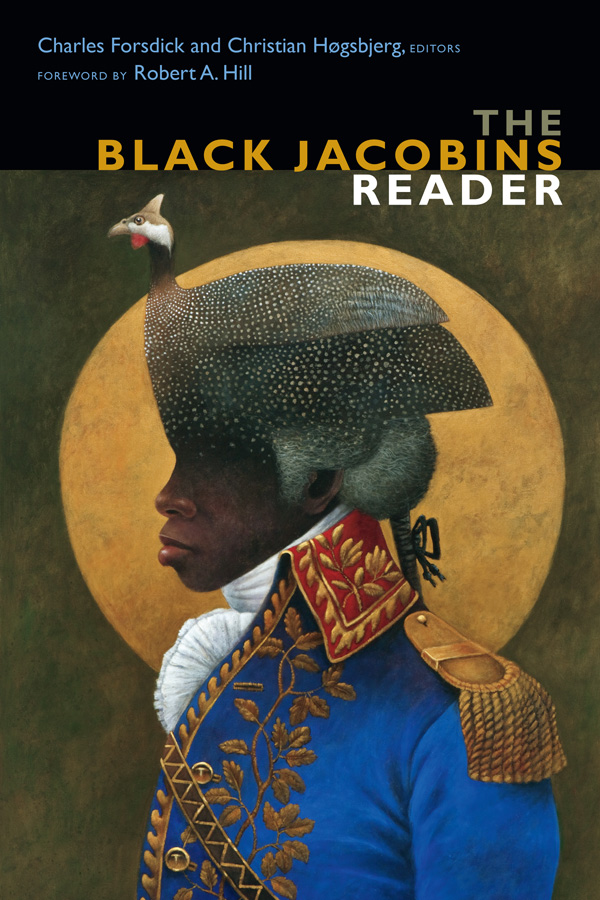 The Black Jacobins Reader
Edited by Charles Forsdick and Christian Høgsbjerg with a Foreword by Robert A. Hill

Containing a wealth of new scholarship and rare primary documents, The Black Jacobins Reader provides a comprehensive analysis of C. L. R. James’s classic history of the Haitian Revolution. In addition to considering the book’s literary qualities and its role in James’s emergence as a writer and thinker, the contributors discuss its production, context, and its enduring importance in relation to debates about decolonization, globalization, postcolonialism, and the emergence of neocolonial modernity. The Reader also includes the reflections of activists and novelists on the book’s influence and a transcription of James’s 1970 interview with Studs Terkel.

“This is the most authoritative confirmation to date of the intellectual stature of C. L. R. James and the prophetic grandeur of his great classic, “The Black Jacobins.” Some eighty years after its first publication, readers of different generations and across a diversity of national origins document their admiration of the depth and spontaneity of James’s analytical interpretation of the Haitian Revolution. It was the first and only example in modern history of a successful slave revolt when a population of enslaved Africans defeated three European armies and converted a slave plantation into the Independent Republic of Haiti. The nineteenth century had judged it inconceivable; and ever since it has survived a universal silence.” – George Lamming

“”The Black Jacobins,” with its unforgettable story of Toussaint Louverture and the Haitian revolution, is one of the great books of the twentieth century. “The Black Jacobins Reader” provides us with a rich selection of reflections on C. L. R. James’s achievement and his own re-thinkings over time. Whether understood as a cultural history of revolution before cultural history, a classic text for revolutionaries, a meditation on universal history, a pioneering Marxist analysis of the slave trade, slavery, and modern capitalism, an inspiration for generations of historians, an exploration of what it means to be ‘West Indian, ‘ a disruption of orthodox notions of historical temporality, or a provocation to think about the relation between the past and the present, or indeed any combination of these, it is undoubtedly a book that continues to inspire many. Black activists in U.S. prisons, writers, and historians are amongst those who remind us, in different ways, of the power of a text such as this one that wrote the history of a people supposedly without history.”—Catherine Hall

This book is a welcome contribution that can assist in ensuring that James continues to educate future generations of activists
Brian Richardson, Socialist Review, 424 (May 2017).

What The Black Jacobins Reader accomplishes is a masterful dialogue not only with respect to The Black Jacobins itself, but with historical writing in general, bringing together some of the most notable voices in Haitian and Caribbean intellectual history to consider the incredible durability of James’s work. The Black Jacobins Reader also manages to stage this dialogue as one that is preoccupied with the ongoing predicament of our time – that of asking the question, time and again: what is freedom?
Bedour Alagraa, Contemporary Political Theory (2017)

Provides the most thorough and wide-ranging study of James’s seminal text to date…. The Reader reminds us of the audacity of James’s text in its time and the inspiration it provided to generations of readers….
Kate Quinn, French Studies, 72, 1 (2018)

With the publication of this edited volume, academics and activists now have a definitive guidebook to C.L.R. James’ revolutionary text, The Black Jacobins … the Reader has breadth and depth and history; it offers much that one should know about the revolutionary history behind The Black Jacobins, as well as the histories the book helped to make.
Jesse Olsavsky, The Black Scholar, 48, 1 (2018)

…sure to become a vital reference point for James scholars, Caribbeanists, postcolonialists, historians, theorists of social and political transformation, and many more besides … containing rare primary materials, new scholarship, and personal reflections from an impressive array of activists, writers, and scholars, The Black Jacobins Reader affirms the enduring relevance of James’s achievement. Forsdick and Høgsbjerg’s Black Jacobins Reader stands as testament to the fact that some 80 years after its first publication, The Black Jacobins continues to inspire, challenge, and provoke.
Philip Kaisary, Slavery & Abolition, 2018.

For sure, this exhaustive collection of essays, reflections, and introductions to James’s epic treatment of the Haitian Revolution will be the authoritative companion to his history for decades to come. Published with a beautiful cover in the C. L. R. James Archives series by Duke University Press, the book’s fifty-two-page introduction, nineteen chapters, and three appendices remind us that James’s definitive contribution to the history, historiography, and interpretation of the Haitian Revolution has yet to be superseded as an engine of literary and scholastic imagination.
Justin Rogers-Cooper, Small Axe Salon, 30, February 2019.