During the Mexican-American war, following US military court-martial, Irish defectors were executed for treason and hanged en masse in 1847. 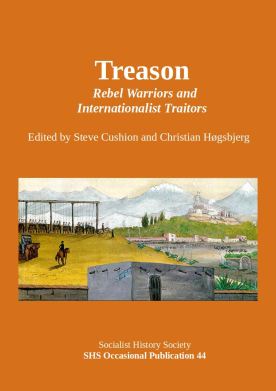 The publication will tell the story of some courageous individuals and groups who put their commitment to a progressive cause before any consideration of loyalty to a nation state, in particular people who have acted from principle when they consider that the country of their birth is acting in a repressive or unjust manner. We are particularly interested in those who have taken up arms against their “own side”, soldiers who side with the oppressed, rather than following orders to kill and subjugate, as well as civilians who actively resisted their own authoritarian governments during times of war.

The book’s nine examples of people or groups acting “disloyally” on their convictions make inspiring reading, and it is always worth a reminder that solidarity overcomes divisions such as those of class and nation to further the interests of exploited and subject peoples.
Brian Durrans, Socialist Correspondent.